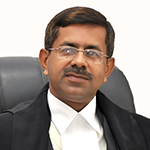 Born on 7th July, 1965. His Lordship passed B.A. Honours and obtained his L.L.B Degree from University of Delhi.

Appointed as Hon’ble The Acting Chief Justice of the High Court of Jharkhand on 20th December, 2022.